The Indianapolis Medical Society was established in 1848

One of my duties as president of Indianapolis Medical Society was to preside over the bittersweet project of transitioning our office to smaller, more economically responsible headquarters.  170 years of documents remind me of the fact that you and I are still playing our part of this history.  Let us celebrate our journey by walking through an early timeline of how medicine has progressed in Indiana.

Withstanding the challenges of living within the early 1800’s in Indiana took a special kind of fortitude.  Medical knowledge was not learned from textbooks, written in Latin, about diseases encountered a world away.

Indiana medical pioneers, out of necessity, called upon the more readily accessible “book of experiences” and shared their successes and failures in real time.  Army veterans were the best trained physicians for performing emergent surgical procedures and dealing with epidemics brought on by crowded conditions and unsanitary surroundings.  Women developed skills to tend childbirth and learned to utilize native plants to help relieve a variety of maladies that arose from the complications of living.  The medicine man travelled to his patients on horseback, toting the tools of his trade in bulging saddle bags.

The state charter included the need for organization of district medical societies to establish medical standards, increase the quality of medical care and protect citizens from quackery. The first medical society was founded in Vincennes in 1817.  This organization compiled a list of useful drugs and methods, granted licenses to physicians, and expelled physicians for immoral or disorderly conduct or for using nostrums.

The cholera epidemic of 1848 stimulated an urgent need to identify a wider range of experts who could recommend rules of health, cleanliness and reasonable treatment plans.  It was in that year that the Indianapolis Medical Society was established.

A year later, a group of Indianapolis physician leaders convened a meeting to create the Indiana State Medical Association. The principles developed: to foster 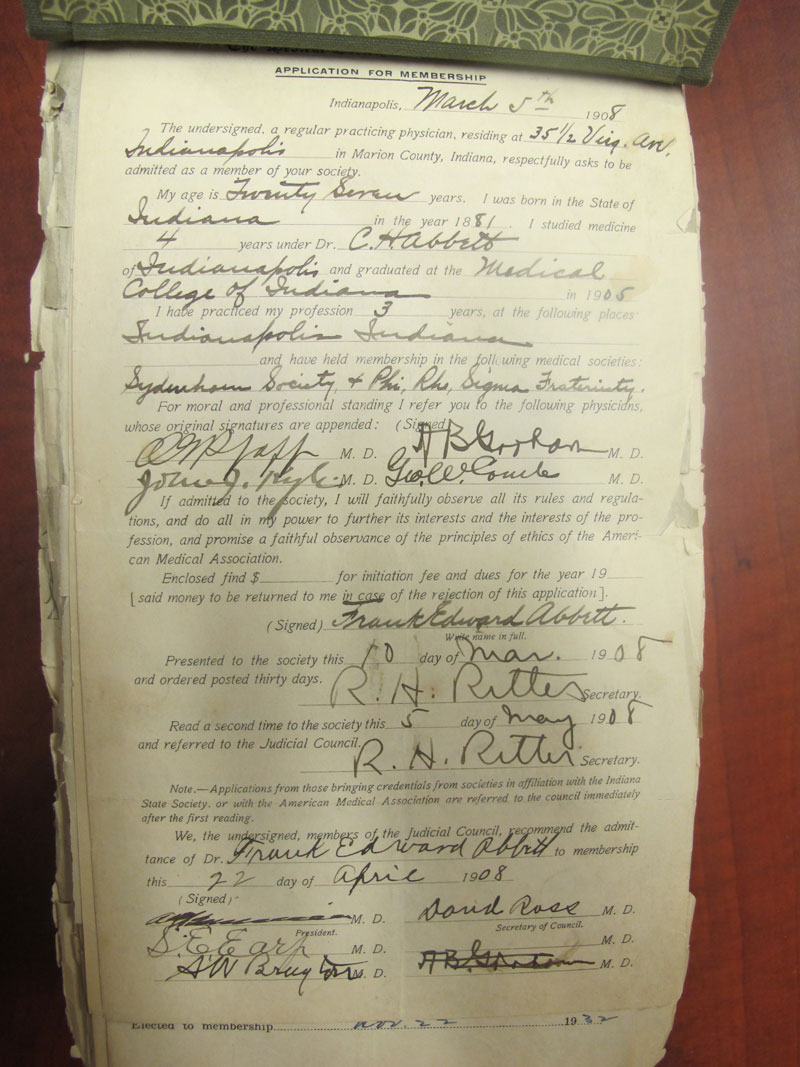 the development of scientific medicine by sponsoring discussions, paper presentations, and publishing a medical journal; to protect public health by assuring the professionalism of physicians within the maintenance of an organized medical profession.  The activities of our local and state medical associations have proven invaluable to the development of state-wide improvements in health.  At one time, the two organizations occupied the same building, along with physician offices in the Hume Mansur Building on Ohio Street.

From the beginning, local societies were the entry point for identifying qualified members, and disciplining “quacks and unscrupulous characters”.  A member was required to be registered as a member of a local society in order to be considered a member of the state organization. The American Medical Association, founded in 1847, was a strong proponent of the local societies by aiding the publication of officer biographies and photos and providing guidance in compiling accurate membership lists.

The above quote was taken from the book One Hundred Years of Indiana Medicine 1849-1949.  When the ISMA was founded, the doctors created an exhaustive document of their deliberations, entitled the Transactions.  Charles N. Combs, MD of Terre Haute summarized the yearly accomplishments.  Here are some of my favorites:

1865:  The Civil War caused much disarray in being able to hold meetings.  County societies are criticized for allowing unscrupulous members in.

1880:   Resolution to pay $1.10/member for any deceased member’s family because doctors are notoriously poor.

1881:  The meeting rejects a paper submitted for presentation because the presenter is a woman.  A resolution is drafted and voted down stating the society is not opposed to the medical education of women.

1885:  Complaints against doctors increased so much, the state mandates that county societies need to increase policing of their members.

1891:  Rancorous debates over “Heredity” where the president “advocated the elimination of all criminals, degenerates and defectives so that a pure strain only could be propagated.”  That same year, discussions of fees and accepting favors for services were debated. Medical education is defined as 4 years of study including 3 courses for 5 months each.

1894:  Establish migrating meetings to include far reaching counties, hotel and meeting space availability was a problem anywhere outside Indianapolis.

1895:  Role of pharmaceutical companies in displaying their products during the state meeting.

1898:  Report from State Board of Medical Examiners and Registration report 4000 doctors listed, 600 mountebanks.  The Indianapolis Medical Society had put together a pathology case history exhibit that was so well received it was sent to the AMA meeting and became a hallmark for educational presentations.

1903-1908: Content of medical advancements necessitated reorganization of how medical information is disseminated.  Journals are given professional acceptance.

1935:  Socialized medicine and birth control are both debated, then “irresolutely dodged by ordering a committee to make further study of the moot point”.

1940-41: Training for doctors to conduct enlistment exams.  Of the 2000 docs in the state, discussion of how to cover areas where physicians are called to serve.

1942:  How to grant privileges to war refugee doctors.  Efforts of working during wartime sidelined the debate for publicly controlled health service.

1943:  Doctors are mandated by federal government to deliver medical care to military families.

1947:   Physicians agree to designation by suffix such as MD, DDS instead of the prefix “Doctor”.  $500 scholarships are offered to medical students who agree to practice in rural areas. William B. Smith, MD, first African-American doctor accepted into IMS.

We have come a long way from the disorganized way medicine was practiced in the pioneer days.  Yet we are now modern pioneers, battling the same scourges, facing new challenges, keeping the needs of our patients, communities and our profession foremost in our efforts.

The Indianapolis Medical Society has recently undergone some surgical, visual enhancements, as you can see.  We’ve kept evidence of the past to remind us how far we’ve come.  Here are the logos that have represented the IMS over the years in chronological order.